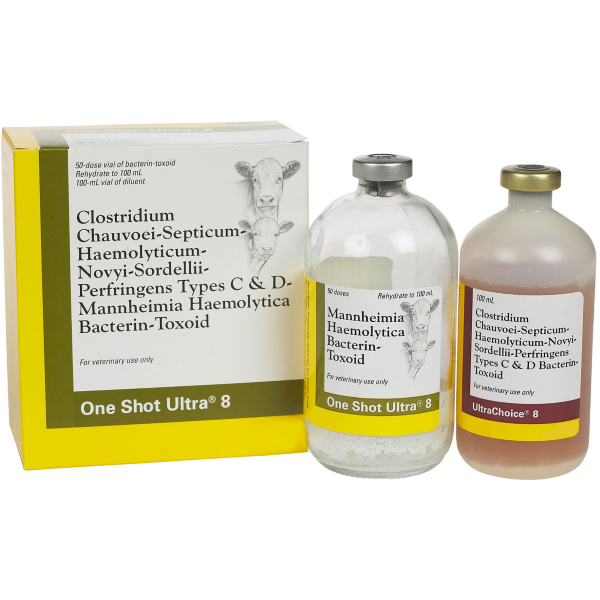 Find in a Murdoch's store
Quantity: Max is {{vm.selectedVariant().maxCartQuantity}} per order.
THIS PRODUCT SHIPS GROUND ONLY

One Shot Ultra 8 is for vaccination of healthy cattle as an aid in preventing blackleg caused by Clostridium chauvoei, malignant edema caused by Cl. septicum, bacillary hemoglobinuria caused by Cl. haemolyticum, black disease caused by Cl. novyi, gas-gangrene caused by Cl. sordellii, enterotoxemia and enteritis caused by Cl.perfringens types B, C, and D, and bovine pneumonia caused by Mannheimia (Pasteurella) haemolytica type A1. Although Cl. perfringens type B is not a significant problem in North America, immunity is provided by the beta toxoid of type C and the epsilon toxoid of type D. The freeze-dried component is a preparation of inactivated whole cultures of M. haemolytica propagated to increase the production of leukotoxin and capsular and cell-associated antigens. The liquid component consists of killed, standardized cultures of Cl. chauvoei, Cl. septicum, Cl. haemolyticum, Cl. novyi, Cl. sordellii, and Cl. perfringens types C and D, with a special, water-soluble adjuvant (Stimugen) to enhance the immune response.

Efficacy of One Shot Ultra 8 against M. haemolytica was demonstrated in a challenge-of-immunity study. Cattle (300-550 lb) vaccinated with one dose of One Shot Ultra 8 were subjected to severe experimental challenge at two weeks post vaccination with a heterologous strain of M. haemolytica type A1. Four days post-challenge, animals were necropsied and individual lungs were evaluated for lung damage and lesions characteristic of M. haemolytica type A1 infection. Vaccinates demonstrated a statistically significant reduction (82.6%) in lung damage compared to animals receiving a placebo. Immunogenicity of the clostridial fractions was confirmed by serologic studies

Murdochs.com stands behind all of its products. We guarantee our merchandise to be free of manufacturing defects and will accept any defective item for refund or exchange. For more details, please see our full Return Policy.

We're happy to help! Chat with us or visit our Contact Page for more details.

*Some restrictions apply. We have temporarily suspended shipping to California while we work on Proposition 65 compliance. Read more.